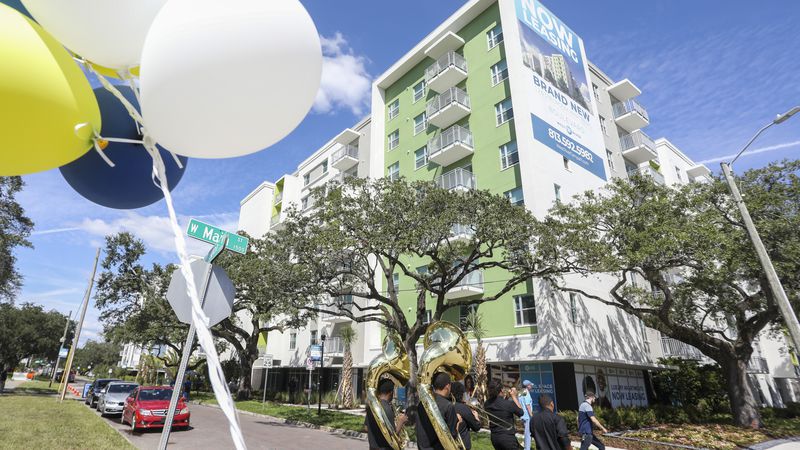 TAMPA – Jessica Heaton and her husband Benjamin Marcado applied for affordable housing three years ago, when they moved to the Tampa Bay area from Massachusetts.

They initially settled in Spring Hill, but received an email in April saying they had been approved for a unit in Tampa.

The couple were among the first to move into the West River development in Tampa, which opened three new apartment towers this summer. The urban housing project, located across the river from downtown and north of Interstate 275, is part of the Tampa Housing Authority’s efforts to revitalize an area that was once home to the world’s first public housing project from the city, North Boulevard Homes.

Iloanya said the new towers are in stark contrast to what came before. North Boulevard Homes was deteriorating and was abandoned, he said, describing it as a place where “Tampa Bay’s promises of a good life cannot be redeemed.” But now it can be, he said.

Forty-two former residents have returned to the corner of North Oregon Avenue and Union Street, according to Related Group, the development company partnered with the city on the West River project. About 12% typically return after being relocated, said Leroy Moore, senior vice president and chief operating officer of the Tampa Housing Authority.

The towers offer one to three bedroom apartments ranging from 600 to 1,200 square feet. Apartments have full kitchens, washer / dryers and hardwood floors. Each building has a library with free access to a computer, a fitness center and a games room.

There is also a park under construction with preserved century-old oak trees and a fitness obstacle course – part of a collaboration with the NFL Alumni Chapter – which will include a 40-yard pitch, as well as fitness equipment. agility like floating boards and ninjas. not.

There has been strong speculation about Publix coming to the West River area for months. But developers, Publix and city officials would not confirm whether the Florida-based grocer was considering opening a store. The area has long been considered a “food desert”, where there is no easy access to grocery options that sell fresh foods.

The developers said on Wednesday they were determined to change that.

Publix must first obtain a license for a store, said Albert Milo, president of Related’s mixed income division. And if all goes according to plan, the store would be located along Main Street and North Boulevard across from Blake High School.

Related is working on a fourth Boulevard tower and the Boulevard Villas totaling 134 additional affordable housing units plus four Canopy buildings at West River Towers with more than 400 mixed income units, according to development director Peter Van Warner. Further in the planning, two unnamed lots are expected to house around 200 affordable housing units and 350 market-priced apartments.

The demand for affordable housing is evident, said Mayor Jane Castor. Rents are rising faster in the Tampa Bay area than in any other subway in the United States this year, according to real estate data company CoStar Group.

â€œAs housing prices continue to rise and supply decreases, we have to move faster and faster,â€ Castor said.

The city of Tampa has set a goal of 10,000 affordable housing units by the end of 2027, Castor said. The West River development project would represent approximately 1,000.

Heaton and Marcado, the couple who just moved in with their two teenage boys, said they were amazed at how easy it was to leave their new home to see Ed Sheeran perform for free at the kickoff of the NFL. The balcony of their new apartment offers views of the Hillsborough River and downtown Tampa.

Heaton said she had never lived in such a luxurious apartment before.