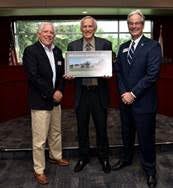 The good news in Ocala, Florida includes the building’s renaming to State College

Read all about it:Mary Sue Rich Community Center Library will be called Sankofa

The College of Central Florida District Board of Trustees honored recently retired athletic director Bob Zelinski by renaming the building, according to a CF press release. The former Newton Perry Aquatic Center, which will soon house the athletics administration, will be named the Bob Zelinski Athletics Building.

“The college board and administration are proud to recognize Bob for his years of service and his commitment to excellence,” CF President Jim Henningsen said in the statement. “His expectations of hard work in the classroom as well as on the field has prepared his student-athletes for life after graduation.”

Zelinski retired from the CF in June after 23 years of college service and 51 years in the Florida College System.

Clay Lewandowski, of Dunnellon, is a member of the NCAA Division III men’s tennis team at Albright College, according to a school press release. A graduate of Dunnellon High School, Lewandowski is a sophomore in business administration and sociology at Albright.

Sharon McCarron and Mary Ziegenhorn of the GFWC Greater Ocala Woman’s Club held a rally to fill backpacks with school supplies which were then donated to the Ocala Domestic Abuse Center.

Dunnellon’s Theodore Josiha Haig will release his sixth mystery thriller, ‘Baldwin Village’, in October. Haig is originally from New York and is a screenwriter, playwright and novelist.

“Baldwin Village” is a novel about a Jewish community in Toronto that is friendly to American deserters and draft dodgers during the Vietnam War.