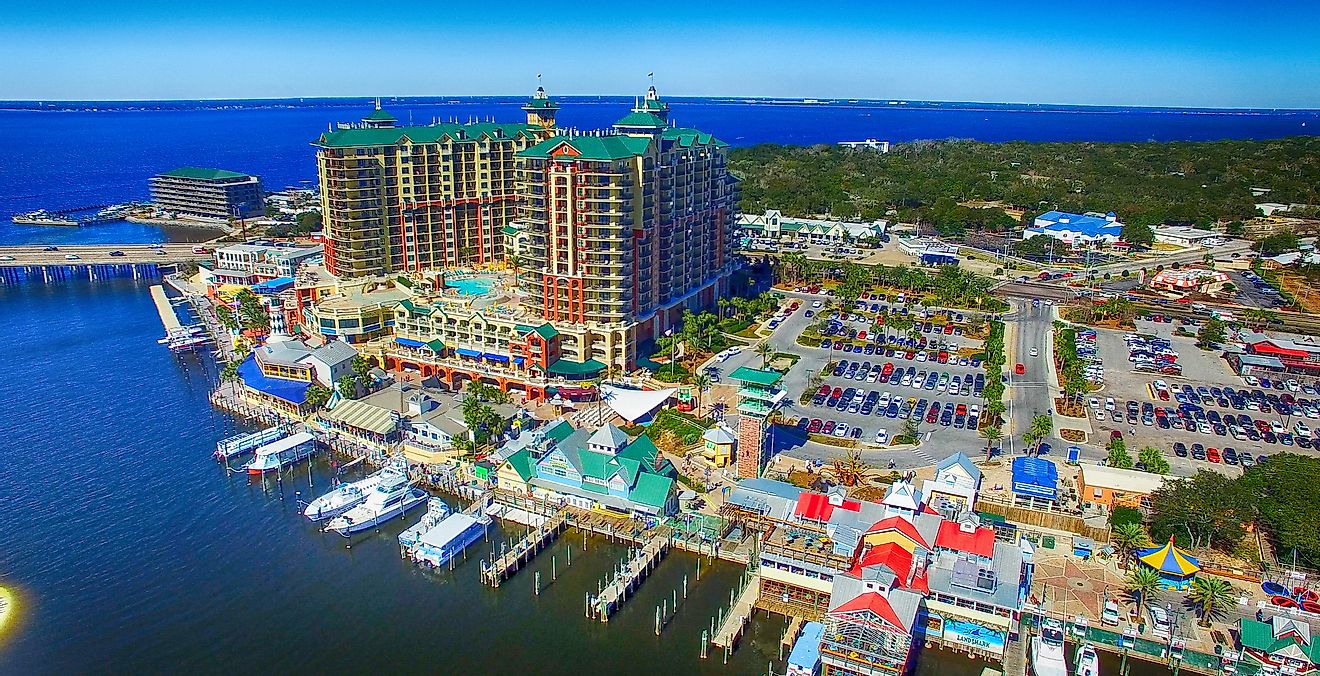 Destin is a small city located in Okaloosa County, in the Florida Panhandle, in the northwest part of Florida, United States. Located on the Emerald Coast, Destin is the main city of the “Crestview-Fort Walton Beach-Destin, Florida, Metropolitan Statistical Area.” Destin is a popular tourist destination and is well known for its spectacular white sand beaches and clear green waters. Widely known as “The luckiest fishing village in the world” the city’s large fish population attracts thousands of anglers, who make up a large portion of the visitors who visit Destin each year. The city also claims to have the largest and most elaborate fishing fleet in Florida.

Destin covers a total area of ​​21 km2, of which 19 km2 is land and 1.6 km2 is water. The city is located on a peninsula that separates Choctawhatchee Bay from the Gulf of Mexico. The peninsula is believed to have originally been a barrier island, but has gradually become connected to the mainland due to hurricanes and sea level changes. Destin is located near several other major cities in the region. Located west of Destin is the city of Fort Walton Beach, while the city of Niceville is located north of Destin across Choctawhatchee Bay. The 5.8 km long Mid-Bay Bridge connects US Route 98 from Destin to State Road 20 from Niceville. US Route 98 also leads approximately 90 miles east to Panama City and 77 miles west to Pensacola. Also called the “Pass of Destiny” the eastern pass located at the western end of the peninsula separates it from the island of Santa Rosa.

According to the Köppen climate classification, Destin experiences a humid subtropical climate with long, hot summers and cool, windy winters. The summer season lasts from late May to September, where July being the hottest month, has an average high temperature of 31.1°C and a low temperature of 25°C. The winter season lasts from early December to March, with January being the coolest with an average low temperature of 7.7°C and high temperature of 16.1°C. The city receives an average precipitation of 55.35 inches annually. A 2013 environmental study identified Destin as one of Florida’s cities most at risk from flooding. The Florida Department of Environmental Protection in 2019 listed parts of the beach as “badly eroded.”

The population and economy of Destin

Destin is home to a population of 13,702 with a median age of 42.3. Destin’s population has grown since the 2010 U.S. Census, which listed the city as having a population of 12,305. Approximately 1,390 people (10.1% of residents) of Destin were born outside of the United States. The most common hometown of foreign-born residents in Florida in 2019 is Cuba, followed by Haiti and Colombia. Destin’s largest ethnic groups are non-Hispanic whites at 83% of the city’s population, followed by other races at 5.42%, Hispanic whites at 3.63%, two or more races at 2.88 % and African Americans at 2.39%. All households in Destin speak English as their primary language, and 93.6% of Destin residents are United States citizens.

As of 2019, the median household income in Destin is $79,000 and the median property value is $332,000. The majority of Destin residents drove to work alone, and the average number of car owners in Destin was two cars per household. Destin’s economy employs 7,110 people in the city’s high-paying industries, including accommodation and food services, retail, health care and social assistance, professional, scientific and technical services.

Destin is a popular tourist destination and is well known for its white sand beaches and emerald waters. The sand found on the shores of Destin is believed to be the whitest in the world and is composed of finely ground quartz crystals that the Apalachicola River washed down from Appalachia. There are approximately 12 beach access points in Destin, of which the Henderson Beach State Recreation Area is the largest. According to an estimate by the Florida Department of Environmental Protection, more than 80% of the 4.5 million visitors to the Emerald Coast visit Destin each year. The Destin Fishing Rodeo is an annual fishing tournament held in Destin in October that attracts thousands of anglers. The Destin Seafood Festival also takes place on a weekend in October. Besides fishing, other recreational opportunities include water sports, golf and tennis.

Tourism plays a crucial role in the economy of the city and during the tourist season the population of the city reaches around 40,000. Several hotels, beach houses, motels, bungalows and condominiums have been built to cater to this large number of tourists. The Henderson Park Inn is an award-winning beachfront hotel with luxury amenities in Destin that offers beautiful views of the white sand beaches of the Emerald Coast and Gulf of Mexico. There are over 40 water attractions, thrill rides and a miniature golf course at Destin’s Big Kahuna Water and Adventure Park.

Destin has a rich historical heritage dating back to the early 7th century. In 1538, Spanish explorers surveyed Florida, and in 1693 the first known map of the East Pass and its shores was drawn by Don Francisco Tapia, who explored the coast of Florida. Between 1845 and 1850, the area was settled by a New London-based fishing captain named Leonard Destin. Captain Destin and his descendants fished in the area for several decades. In due time, Destin quickly grew from a small fishing village to a popular destination for tourists. During the 1970s, condominiums were built in the city for the first time. The city of Destin was officially incorporated as a municipality in 1984.